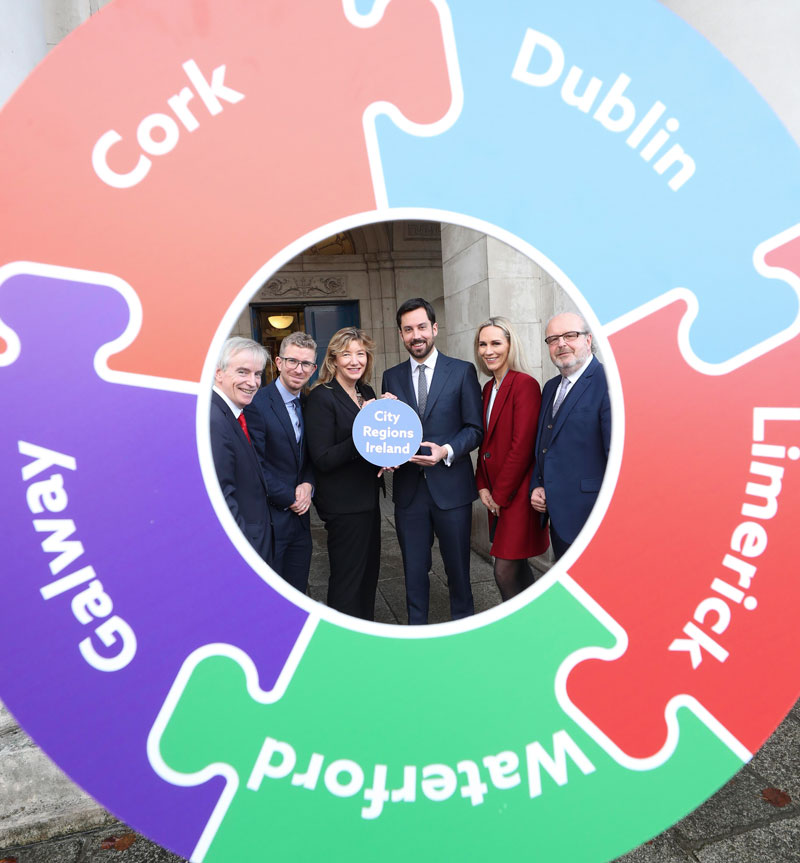 City Regions Ireland is a new group bringing together the Chambers of Commerce of Cork, Dublin, Galway, Limerick and Waterford- Ireland’s 5 cities as identified by the National Planning Framework, Ireland 2040. City Regions Ireland today met with the Minister for Housing, Planning and Urban Development Eoghan Murphy TD to outline what is needed to safeguard an ambitious urban future for Ireland’s City Regions.
‍

In one voice, the 5 cities have devised a document detailing the following 8 principles, spanning infrastructure, housing, and planning to inform policy making, maximise growth, and tackle the common issues and opportunities in our urban regions.
‍

‍
City Regions Ireland is working for the common goal of ensuring the country’s 5 cities are developed sustainably as the national and regional economic engines and to support a population projected in the National Planning Framework to grow by 25% in Dublin and 50% in the other four cities out to
2040.

Minister for Housing, Local Government and Urban Planning Eoghan Murphy commented on the new City Regions Ireland group;
“It’s essential that we as a country recognise the important part that our cities play in driving our national economy, they are centres of business, culture, education and innovation for everyone, and not just for those who live in them. I’m happy to see that Cork, Dublin, Galway, Limerick and Waterford have come together for the collective betterment of urban Ireland, and I look forward to working with City Regions Ireland to ensure that our cities grow and develop sustainably into the future.”

A representative for City Regions Ireland said;
“For too long urban Ireland has been badly in need of a unified voice calling for what all of our cities require, calling for sustainability and to be effectively planned as cities that people can live, play and do business in. Today, City Regions Ireland has been launched to remedy this and to give our cities a clear urban agenda incorporating every aspect of city planning from housing and core density to public transport and international connectivity. Ireland’s 5 city regions have been identified as the economic engines of the country in the National Planning Framework and City Regions Ireland has come together under the common goal of ensuring the cities of Cork, Dublin, Galway, Limerick and Waterford are developed with the coordination and intent of real urban planning.”
‍

City Regions Ireland is made up of Cork Chamber, Dublin Chamber, Galway Chamber, Limerick Chamber and Waterford Chamber, all members of Chambers Ireland.